We all hate them – and always have done, from the first parental nagging about homework tasks, through the hateful slog to deliver the 50,000 word thesis on the due day to the routine demand of a professional writer’s life – to produce a specified number of words by a certain date, over and over again.

Everyone has their favourite deadline horror stories. I’ll never forget my first commission. I was still at university, working on my thesis (deadline too far off to be the slightest worry), and beginning to enjoy the life of a postgrad student. I had met a poet and editor of a prestigious arts magazine who lived near me. We’d had a drink or two together, he’d invited me to his house, crammed with books and heaps of manuscripts. I admired him hugely and he seemed to like me. He even published a 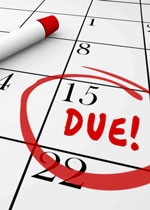 couple of my poems. All was good.

And then came the day when he reached for a pile of shiny new poetry books and said: ‘Simon, just do me two thousands words on these by Thursday week.’ At a glance I could see there were some big hitters in the pile, established poets of great repute. Who was a total unknown like me to pontificate on the quality of their latest slim volumes?

Intuiting my thought, my editor friend said: ‘Don’t worry about the name on the cover. Just tell us what you think. Don’t hold back.’

And with that I was given a friendly push back through the front door and set off along the road to my own home, and my own study, and my own desk where, come hell or high water, I had to write two thousand words on some of the poetry world’s great and good.

I was both elated and terrified. Writing poetry was one thing – pretending I understood other people’s quite another, let alone committing my thoughts to print in a publication that would be read by each and every one of the poets under review. I studied each book from cover to cover, making copious notes. I wrote a draft; and another one, in which I changed the order of the books; and yet another one, changing my mind about everything I’d put in the first two. I woke in the night to scribble new thoughts, which seemed less brilliant in the morning. It was torture, and not much fun for my long-suffering partner, who of course had to read every version of this never-ending work in progress.

But that’s the point: it wasn’t never-ending. It couldn’t be. The review – in typescript back then – had to be delivered by Thursday week. And it was – very late on Thursday afternoon. And even as I started posting it through the door, my instinct was to snatch it back, remove it from its envelope and check yet again for spelling mistakes, grammatical errors and, worst of all, signs of ignorance and stupidity – and maybe take it home for a final revision. But I realised I would probably end the day a single man if I did that, so I let it go, snapped up by metal mouth of the letter-box.

The relief was wonderful, though the next forty-eight hours were overshadowed by the fear that it would be rejected or returned as inadequate. But no, it was deemed fit for publication, and I basked in the glory of having a whole page of my views printed in one of the country’s leading literary magazines. Fame at last, I kidded myself.

But I had passed the test, written my set number of words and delivered them by the deadline, and that thought has sustained me through many a deadline crisis in the intervening years.

Most deadlines are contracts with an editor or publisher. It’s basically down to the writer to get their act together. But ghosting for a third party can complicate things.

With the best will in the world, you can’t meet a deadline if you can’t get the time you need to get the details of the story you’re trying to tell. And people who warrant a ghosted memoir are, pretty much by definition, very busy people. It can be frustrating, having interviews cancelled, and the writing process stalled. The momentum is lost, and resuming the book after an enforced break can be like trying to start a car that has been left parked on the drive for too long.

This shouldn’t scupper the whole project, but it does make it more difficult. I’m certainly learning to make more use of the time I am given, keeping the questions going for as long as possible, knowing that every minute I record is going to extend the number of words I can write in the next passage of play. And hopefully the outcome will satisfy the client – even if the original deadline has been missed.

The Prologue and Epilogue

Ghostwriting is a career, not…

What’s on your bookshelf?

 Ghostwriting – What to expect…

Could the publishing industry survive…
This site uses cookies: Find out more.